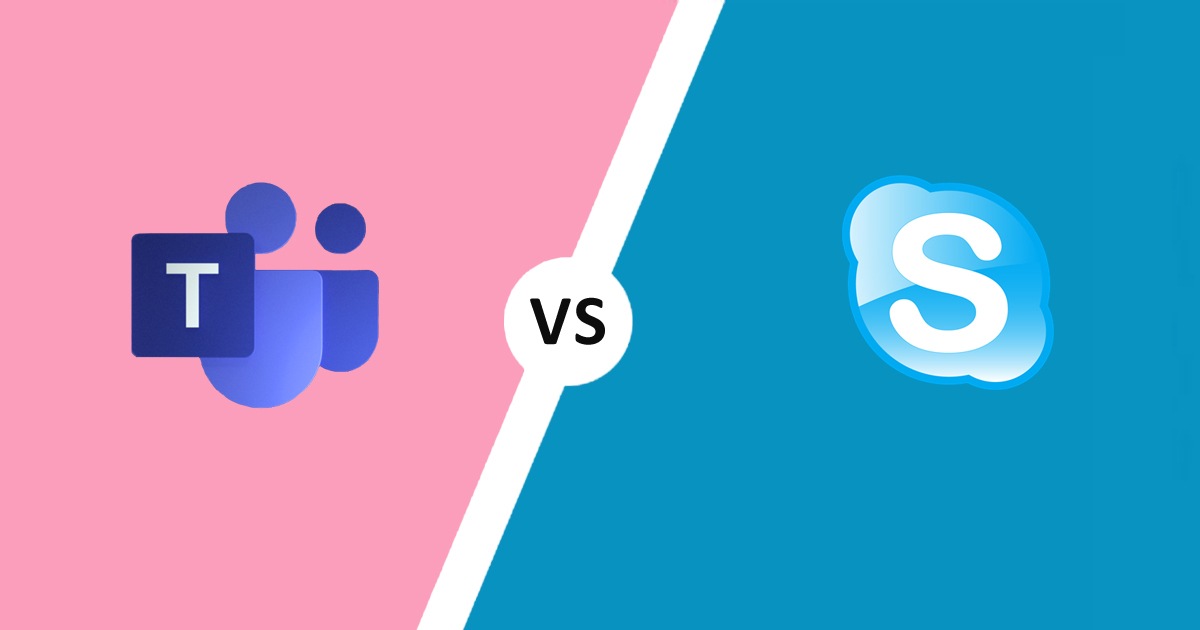 When Skype came into existence way back in 2003, it practically revolutionized the way we would communicate. It became the benchmark for video calls that could be made to anyone around the globe with only an internet connection. The application continued to evolve after it was acquired by Microsoft and went on to replace Microsoft Lync as the enterprise telecommunications application in the form of Skype for Business. It is around this time that other communication tools started catching up threatening the virtual monopoly of the Microsoft application, and Teams came along. We compare Microsoft Teams vs Skype to identify the improvements in the former.

Why Did Microsoft Develop Teams When Skype Existed?

Before we make the comparison between Skype vs Teams, let us understand why Microsoft decided on moving from Skype to Teams.

Microsoft wanted to build a collaborative platform that can work seamlessly with applications in the Office 365 suite. Although Skype evolved significantly since the time it was launched, there could only be so many improvements made to its aging architecture. It is under these circumstances that Microsoft had to build a brand-new communication and collaboration platform, now called Microsoft Teams. This platform is built around the cloud architecture that makes the application highly customizable, scalable and secure while optimizing bandwidth consumption and minimizing disruptions. The architecture allows integrating several new capabilities while improving the overall user experience.

The architectural upgrades allowed Microsoft to enhance the capabilities of the Teams application and tilt the Microsoft Teams vs Skype comparison in favor of the former while preparing the latter for its sundown.

Perhaps the first difference that Teams users notice while comparing Skype vs Microsoft Teams is that their chats are autosaved in Microsoft Teams. If you are (were) using Skype for Business, you would have noticed that chats would disappear once the window is closed. While the conversation can still be saved, it requires Outlook to be the default mail client. The saved conversations can be found in the dedicated conversation history folder in Outlook. It could be particularly annoying for Skype for Business users when they accidentally closed an important chat window and lost the context of ongoing chats with their colleagues.

With Microsoft Teams, that is no longer an issue. All conversations are available from the beginning of history until and unless they are specifically deleted. This happens without the dependence of Microsoft Teams on Outlook. Users can find all their chats as they happened whenever they open the window for the specific group or user on any device they use.

Skype for Business clients had several improvements over Lync when it came to instant messaging. Microsoft Teams takes it a notch further. Microsoft Teams users can include GIFs, stickers, and apps to chats apart from the files and emojis along with their messages. Besides, there is greater flexibility in setting up chats based on purposes like departmental segregation, project or user-specific channels. Microsoft Teams introduces threaded conversations allowing users to participate in multiple conversations inside a single tab. So, if your colleague mentions your name in their comment, simply clicking on the resulting notification will take you to the record where you can reply in-line. This threading feature is helpful in Group Chats where the active threads appear at the bottom making it easier for keeping track of the context.

The most telling differences in the Skype vs Teams comparison are in the collaboration features of the two applications. While Microsoft Teams has been built from scratch as a collaborative platform, Skype for Business is essentially a communication platform with features for collaboration thrown in almost as an afterthought. Users can start a meeting with up to 250 participants from within a chat on the Teams application. There is a significant improvement in both audio and video conferencing capabilities in terms of speed, clarity, and additional features. Users can either share the desktop, a screen or single application and use advanced features like translation and transcription for improved communication and collaboration.

The architecture of Microsoft Teams allows businesses to build and integrate their customized applications using SDKs and APIs. It is far more flexible than the Skype for Business client whose native integrations primarily to telephony solutions. While Skype does support add-ins that simplify content sharing in conversations without switching apps, the facility is not available on Skype for Web. Microsoft Teams allows integrating apps and services from the “Apps” tab within the application. The primary advantage of this feature is that users use those services without switching between applications. In other words, Teams allows users to share Wikipedia articles, Weather updates, real-time stock updates, and other such information of interest on chats by pulling information from these services and applications without leaving the chat window. Additionally, it is compatible with, Microsoft Cognitive Services that integrates advanced technologies like machine learning, speech recognition, and other technologies with Microsoft Teams making it a significantly more powerful application than Skype.

Another factor that distinguishes Teams from Skype as a superior collaboration platform is the ability to save and store files within the Teams application. Files shared on chats are stored in SharePoint sites. This allows even offline users to access and search them at a later date. The searchability in Teams is extended to content and people as well. The use of SharePoint within the Teams interface simplifies collaboration with other users who can be addressed with @mentions. It must be noted that Teams, as a standalone application, does not include SharePoint integration. It is therefore recommended for users to subscribe to compatible plans like Office 365 Business Premium or Office 365 Business Essentials.

Teams vs Skype – Does the Comparison Even Matter?

The Teams vs Skype comparison has already largely become irrelevant because Microsoft provides Teams as a part of the Office 365 subscription. Those customers that still haven’t upgraded from Skype for Business Online can continue to use the application till July 31, 2021. Such users can use both Skype for Business and Microsoft Teams parallelly as of date. However, they wouldn’t have completely upgraded to Teams until all users operate in Teams only mode.

If your business needs to upgrade to Microsoft Teams or needs to migrate from Skype for Business, our engineers at Apps4Rent provide 24/7 support via phone, chat, and email. Contact us today.